General population individuals were randomly assigned to value 10 health states using composite time trade off and 7 pairs of health states through discrete choice experiments. A stratified sampling with quotas by location, gender, age and socio-economic status was used to respect the Uruguayan population structure. Trained interviewers conducted face-to-face interviews. The EuroQol valuation technology was used to administer the protocol as well as to collect the data. OLS and maximum likelihood robust regression models with or without interactions were tested.

We included 794 respondents between 20 and 83 years. Their characteristics were broadly similar to the Uruguayan population. The main effects robust model was chosen to derive social values. Values ranged from −0.264 to 1. States with a misery index = 6 had a mean predicted value of 0.965. When comparing the Uruguayan population with the Argentinian EQ-5D-5L crosswalk value set, the prediction for states which differed from full health only in having one of the dimensions at level 2 were about 0.05 higher in Uruguay. The mean index value, using the selected Uruguayan EQ-5D-5L value set, for the general population in Uruguay was 0.895. In general, older people had worse values and males had slightly better values than females.

We derived the EQ-5D-5L Uruguayan value set, the first in Latin America. These results will help inform decision-making using economic evaluations for resource allocation decisions.
vorige artikel Empirical validation of the English version of the Fear of Cancer Recurrence Inventory
volgende artikel Erratum to: An EQ-5D-5L value set based on Uruguayan population preferences 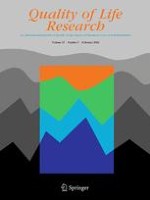 Quality of life in women with lipoedema: a contextual behavioral approach