The aim of this study was to evaluate and validate the ADDQoL and to assess the impact of diabetes on QoL among the type 2 diabetes mellitus patients in Malaysia.

CFA confirmed the presence of one-factor structure for both samples. The internal consistency was high with Cronbach’s alpha values of 0.945 and 0.907 for the ADDQoL Malay and English versions, respectively. Results showed that for all three ethnicities, the most important domain is ‘family life’. Overall, Malay patients stated their ‘living conditions’ is the most negatively affected, while for Chinese and Indians, diabetes has the greatest impact on their ‘freedom to eat’.

The ADDQoL was found to be culturally appropriate, valid and reliable among Malay- and English-speaking type 2 diabetes mellitus patients in Malaysia.
vorige artikel Evaluating Psychometric Properties of the Spanish-version of the Pediatric Functional Assessment of Chronic Illness Therapy-Perceived Cognitive Function (pedsFACIT-PCF)
volgende artikel Erratum to: A new computerized adaptive test advancing the measurement of health-related quality of life (HRQoL) in children: the Kids-CAT 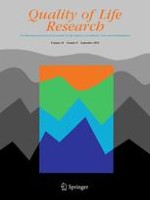 Health-related quality of life in young survivors of childhood cancer