Autism spectrum disorder (ASD) is a complex neurological and developmental disorder, and a growing body of literature suggests the presence of autonomic nervous system (ANS) dysfunction in individuals with ASD. ANS is part of the “gut brain axis”, which consists of an intricate interplay between the gut microbiome, mucosal immune system, enteric nervous system, ANS, and central processes receiving input from the vagus nerve. Measurements of the gut microbiome and the autonomic indices can serve as non-invasive markers of the status of the gut-brain axis in ASD. To our knowledge, no previous studies have explored the relationship between ANS and gut microbiome in individuals with ASD. Furthermore, while previous studies investigated the use of autonomic indices and gut microbiome independently as markers of ASD-related comorbidities, such as anxiety, cardiovascular issues, and gastrointestinal dysfunction, the use of combined autonomic indices and gut microbiome factors to classify ASD and control subjects has not been explored. In this study, we characterized autonomic function of a group of individuals with ASD in comparison to their paired, first-degree relative controls. Second, we explored the ASD gut-brain-axis through the relationship between gut microbiome markers and autonomic indices, as well as the correlation between the gut-brain-axis and clinical presentation of ASD. Lastly, this study explores the predictive capability of gut-brain-axis biomarkers (including autonomic and microbiome indices) in subtyping ASD cases, serving as a starting point to investigate the possibility of assisting in ASD screening and diagnosis that still heavily relies on psychological testing, which may be based on highly subjective standards.
vorige artikel A Pilot Study Comparing Tele-therapy and In-Person Therapy: Perspectives from Parent-Mediated Intervention for Children with Autism Spectrum Disorders
volgende artikel Staff Perceptions and Implementation Fidelity of an Autism Spectrum Disorder Care Pathway on a Child/Adolescent General Psychiatric Inpatient Service 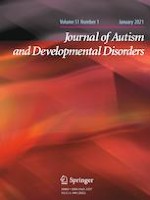 Strategies for Research, Practice, and Policy for Autism in Later Life: A Report from a Think Tank on Aging and Autism