The current study examined changes in the agreement, stability, and concurrent and predictive validity of parent- and self-reports on a frequently used measure of youth anxiety symptoms, the Screen for Child Anxiety Related Emotional Disorders (SCARED), from age 9 to 15. A community sample of 531 families (youth, mothers, and fathers) completed the SCARED and a semi-structured diagnostic interview when children were ages 9, 12, and 15. Agreement between youth and each parent on youth anxiety symptoms was weak at age 9 (r = 0.12–0.17), but moderate at age 12 (r = 0.31–0.36) and 15 (r = 0.31–0.46); mother-father (r = 0.50–0.53) agreement was greater than youth-parent agreement at every wave. Stability of youth-reported symptoms was low between age 9 and 12 (r = 0.25), but much higher from age 12 to 15 (r = 0.57); mother- and father-reported youth anxiety symptoms demonstrated high stability (r = 0.53–0.74) at both intervals. Self- and parent-reported youth symptoms were both significantly associated with youth anxiety disorder status, cross-sectionally and prospectively. When considered simultaneously at age 9, only parent-reported anxiety symptoms uniquely predicted concurrent and subsequent youth anxiety diagnoses. However, by age 12, parent- and youth-reported anxiety symptoms were each independently associated with concurrent and subsequent anxiety diagnoses. Agreement, stability, and concurrent and predictive validity of youth self-reported anxiety symptoms are poorer than parent-reports in middle childhood, but comparable by middle adolescence. However, all reporters provide unique information about youth anxiety at each of the developmental periods examined.
vorige artikel Socio-ecological Resilience Relates to Lower Internalizing Symptoms among Adolescents during the Strictest Period of COVID-19 Lockdown in Perú
volgende artikel Maternal Worry Socialization and Toddler Inhibited Temperament: Transactional Associations and Stability across Time 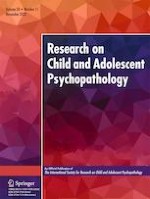