To explore age-trajectories of quality of life (QoL) and influences on them in a 4-year period among older adults living in England.

Data come from three waves (2002–2003 and 2006–2007) of the English Longitudinal Study of Ageing, a large panel study of 11,392 individuals aged 50 and over. We used Latent Growth Curve models and ageing-vector graphs to describe both individual differences and average population age-trajectories in QoL (measured by the CASP19 questionnaire).

QoL at baseline was poorer for older than younger respondents, with the differences widening with age. QoL also declined more rapidly for older individuals. Gender, education, depression, limiting long-standing illness, difficulty with ADL-s, lack of wealth, non-employment, decreased number of friends and low positive support had a negative impact on QoL. Living with a partner had a positive effect on the QoL of men but not of women. The ageing-vector graphs revealed a clear gradient in age-trajectories of QoL for those in the best to the worst psychosocial, socioeconomic and health conditions.

Younger old adults can be prepared for further ageing by increasing their network of friends and engaging with the wider community while they are able.
vorige artikel The association of body mass index and health-related quality of life in the general population: data from the 2003 Health Survey of England
volgende artikel Does urinary incontinence affect quality of life of Greek women less severely? A cross-sectional study in two Mediterranean settings 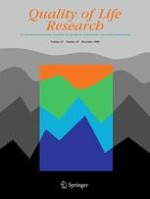 The association of survey language (Spanish vs. English) with Health Utilities Index and EQ-5D index scores in a United States population sample