Age and gender differences in health-related quality of life of children and adolescents in Europe: a multilevel analysis | mijn-bsl Skip to main content
ZOEKEN MENU 1 2 3 4

To determine age and gender differences in health-related quality of life (HRQOL) in children and adolescents across 12 European countries using a newly developed HRQOL measure (KIDSCREEN).

The KIDSCREEN-52 questionnaire was filled in by 21,590 children and adolescents aged 8–18 from 12 countries. We used multilevel regression analyses to model the hierarchical structure of the data. In addition, effect sizes were computed to test for gender differences within each age group.

Children generally showed better HRQOL than adolescents (P < 0.001). While boys and girls had similar HRQOL at young age, girls’ HRQOL declined more than boys’ (P < 0.001) with increasing age, depending on the HRQOL scale. There was significant variation between countries both at the youngest age and for age trajectories.

For the first time, gender and age differences in children’s and adolescents’ HRQOL across Europe were assessed using a comprehensive and standardised instrument. Gender and age differences exist for most HRQOL scales. Differences in HRQOL across Europe point to the importance of national contexts for youth’s well-being.
vorige artikel Assessment of the impact of eating disorders on quality of life using the disease-specific, Health-Related Quality of Life for Eating Disorders (HeRQoLED) questionnaire
volgende artikel Impaired parent-reported quality of life in treatment-seeking children with obesity is mediated by high levels of psychopathology 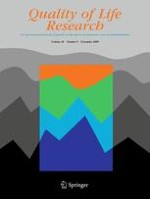 Assessment of the impact of eating disorders on quality of life using the disease-specific, Health-Related Quality of Life for Eating Disorders (HeRQoLED) questionnaire

Quality of life after dislocation of hip arthroplasty: a prospective cohort study on 319 patients with femoral neck fractures with a one-year follow-up

Determinants of global quality of life before and after major cancer surgery: an exploratory study

The classification systems of the EQ-5D, the HUI II and the SF-6D: what do they have in common?