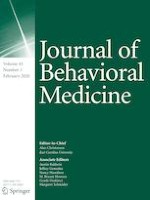 Dyadic associations between physical activity and body mass index in couples in which one partner has diabetes: results from the Lifelines cohort study

HIV microaggressions: a novel measure of stigma-related experiences among people living with HIV

Anxiety symptoms and smoking among Latinx adult smokers: the importance of sensitivity to internal cues in terms of dependence, barriers for quitting, and quit problems

Sex, race, and the role of relationships in diabetes health: intersectionality matters