We compared the presence of autistic and comorbid psychopathology and functional impairments in young adults who received a clinical diagnosis of Pervasive Developmental Disorders Not Otherwise Specified or Asperger’s Disorder during childhood to that of a referred comparison group. While the Autism Spectrum Disorder group on average scored higher on a dimensional ASD self- and other-report measure than clinical controls, the majority did not exceed the ASD cutoff according to the Autism Diagnostic Observation Schedule. Part of the individuals with an ASD diagnosis in their youth no longer show behaviors that underscribe a clinical ASD diagnosis in adulthood, but have subtle difficulties in social functioning and a vulnerability for a range of other psychiatric disorders.
Opmerkingen

The study is based on data from the clinical cohort of the Tracking Adolescents’ Individual Lives Survey (TRAILS CC), a prospective study aiming to explain the development of mental health from early adolescence (approximately age 11) into adulthood, with bi- or triennial assessments. The clinical cohort for TRAILS runs parallel to the TRAILS general population cohort. The TRAILS study has been described in detail elsewhere (Oldehinkel et al. 2015). The clinical cohort started in 2004 and consists of 543 individuals who had been referred to a child psychiatric outpatient clinic in the Northern Netherlands any time before the age of 11. The data we present here were mainly collected in the fourth assessment wave of TRAILS at which the participants were approximately 19 years old.
The TRAILS CC data were linked to the Psychiatric Case Register Northern Netherlands (PCRNN). The PCRNN registers specialist child, adolescent and adult mental health care consumption in the three Northern provinces of the Netherlands (population 1.7 million), which overlaps with the area from which TRAILS participants were recruited. Children and their parents gave consent to link their TRAILS data to health care records in the PCRNN. The PCRNN contained data from 2000 up (4 years preceding the start of TRAILS) on clinical diagnoses.
In the present study we compared 162 participants with an autism spectrum diagnosis (Asperger or PDD-NOS) diagnosed before the age of 19 to the remainder of the participants (n = 377) in the TRAILS CC cohort who were referred for different psychiatric problems (Fig. 1). At age 19, 389 participants and their parents completed self- and other rating version of the ASBQ, and 345 completed the Composite International Diagnostic Interview (CIDI, Kessler et al. 2004), all at the fourth assessment wave.
×
As an add-on study in TRAILS CC, we invited all participants with a DSM-IV classification 299.80 (Asperger's Disorder or Pervasive Developmental Disorder- not otherwise specified) according to the PCRNN (n = 162) to take part in the ADOS assessment. In addition, we selected a random comparison group of 29 participants from the non-ASD diagnosed part (according to the PCRNN) of the clinical cohort to compare ADOS scores. Most of them had a primary diagnosis of ADHD (n = 18), the other participants in this group had a wide variety of primary psychiatric diagnoses.
The current study also used data on the functional status of participants from the general population sample of TRAILS. This was done for educational attainment and number of social contacts, with the aim to compare findings to normative reference values from the general population.

The ASD and non-ASD clinical comparison group were compared on intelligence and demographic characteristics as measured at age 11 (baseline). Intelligence was measured on the basis of the Vocabulary and Block Design subtests of the Revised Wechsler Intelligence Scales for Children leading to approximate IQ scores (Silverstein 1967). Further, we measured the following socio-demographic variables at age 19: gender, age, parental SES, educational attainment, use of medication, consultation of mental health care in the last six months before assessment, current job or type of benefits, and number of social contacts. Self-report scores were supplemented with parent-report scores where appropriate.

The presence of ASD symptoms was assessed at baseline (age 11) using the Social Communication Questionnaire (SCQ; Berument et al. 1999) and at wave 4 (age 18–19) using the Adult Social Behavior Questionnaire (ASBQ; Horwitz et al. 2016). The SCQ is a screening tool to identify children at risk for ASD. Its 40 items are based on the Autism Diagnostic Interview—Revised (ADI-R, Lord et al. 1994) and focus on the presence of ASD behaviors during early childhood. The authors defined a cutoff value of 15 for ASD with a sensitivity of 0.85 and a specificity of 0.75. Schwenck and Freitag (2014) found an optimal cutoff value of 14–15 to differentiate ASD and ADHD in children with a normal intelligence (sensitivity 0.68, specificity 0.92), and an optimal cutoff of 11 to differentiate children with ASD and typically developing children in this group (sensitivity 0.92 and specificity 0.87). We used the SCQ scores to determine the likelihood of an ASD diagnosis, and its severity, based on developmental history.
The ASBQ is a quantitative measure of autistic traits with subscales that allow a differentiated description of ASD problems. Factor analysis provided support for six homogeneous subscales that concurred in the self- and other-report versions: reduced contact, reduced empathy, reduced interpersonal insight, violation of social conventions, insistence on sameness and sensory stimulation/motor stereotypies. Reliability estimates and correlations between self- and parent-ratings were good and the score profile on the 44-item ASBQ differentiated a group with ASD from a non-clinical group and patients with other diagnoses (Horwitz et al. 2016). We used both the self- and other-report version.

The Autism Diagnostic Observation Schedule—Module 4 (ADOS, Lord et al. 1999, module 4 for verbally fluent adults) is a standardized, semi-structured observational assessment of social interaction, communication and restricted and repetitive behaviors that is used in the diagnosis of ASD. Although the ADOS is not designed to be used in isolation in the diagnostic assessment of ASD, its discriminant validity in a population with a milder form of the spectrum has been reported as excellent (Fusar-Poli et al. 2017). An ADOS classification was originally based on thresholds on Social Interaction, Communication and on their combination (original algorithm, Lord et al. 1999). In 2014, Hus and Lord published a revised algorithm, containing a Social Communication domain and a Repetitive Restricted Behavior domain (revised algorithm, Hus and Lord 2014). They found satisfactory sensitivity of 90% and specificity of 82% of the classification, and confirmation of the applicability of the two-domain structure of the DSM5 in the revised algorithm of module 4. In the current study the ADOS was administered and scored by trained and certified psychologists.

Descriptive analyses were conducted to examine the frequency of outcomes across the diagnostic subgroups. Differences between the ASD group and the clinical non-ASD comparison group means on demographic variables were examined using Student's t test or chi-squared test, as appropriate. Group differences in SCQ scores and ASBQ self- and other- report scores between the ASD group and the clinical non-ASD comparison group were analyzed using multivariate general linear modeling (GLM) on the subscales of the SCQ and the ASBQ simultaneously. This multivariate test was followed up by univariate GLM analyses per subscale of the SCQ and the ASBQ. We further examined the difference in ASBQ scores in participants with and without psychiatric comorbidity (‘any disorder lifetime’ on CIDI) in the ASD group by a t test.
Mean ADOS scores on the original and the revised algorithm of the ASD group were compared to those of a clinical non-ASD comparison group using Student t test. Subjects within the ASD group with a revised algorithm ADOS score above and under autism spectrum cut-off were compared on SCQ scores at T1 and comorbid psychiatric diagnoses according to CIDI lifetime scores at T4.
We further examined differences between ASD- and clinical non-ASD comparison groups in CIDI scores using Student t tests and functional status at T4 using chi-squared test.
Effect sizes of between group differences were calculated using Cohen's d, where d ≥ 0. 2 is considered ‘small’, d ≥ 0.5 is considered ‘medium’ and d ≥ 0.8 is considered ‘large’ (Rea and Parker 1992). We used an alpha level of 0.01 in the analyses.

Springer Nature remains neutral with regard to jurisdictional claims in published maps and institutional affiliations.
vorige artikel Definitions of Nonverbal and Minimally Verbal in Research for Autism: A Systematic Review of the Literature
volgende artikel Associated Factors of Self-injury Among Adolescents with Autism Spectrum Disorder in a Community and Residential Treatment Setting
insite
INHOUD
share
DELEN 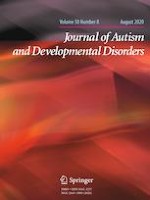 Exploring Human–Companion Animal Interaction in Families of Children with Autism