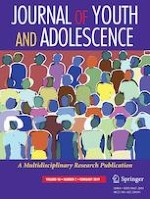 Developmental Change and Correlates of Autonomy in Asian American Adolescents

The Effects of Bystander Programs on the Prevention of Sexual Assault across the College Years: A Systematic Review and Meta-analysis