This study investigated tenth- and twelfth-grade adolescents’ (N ≤ 264) judgments about the acceptability of same-sex peers who varied in terms of their sexual orientation (straight, gay or lesbian) and their conformity to gender conventions or norms in regard appearance and mannerisms or activity. Overall, the results of this study suggest that adolescents’ conceptions of the acceptability of their peers are related not just to sexual orientation but also conformity to gender conventions. Both straight and gay or lesbian individuals who were non-conventional in their appearance and mannerisms were rated as less acceptable than individuals who conformed to gender conventions or those who participated in non-conventional activities. Most surprisingly, for boys, the straight individual who was non-conforming in appearance was rated less acceptable than either the gay individual who conformed to gender norms or was gender non-conforming in choice of activity.
vorige artikel The Dynamic Interdependence of Developmental Domains Across Emerging Adulthood
volgende artikel Adolescents’ Acceptance of Same-Sex Peers Based on Sexual Orientation and Gender Expression 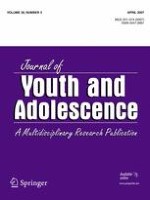 Academic Self-Efficacy Beliefs and Quality of Experience in Learning

Predicting the Onset of Sexual and Drug Risk Behaviors in HIV-Negative Youths with HIV-Positive Mothers: The Role of Contextual, Self-Regulation, and Social-Interaction Factors