Two studies aimed to understand springtime sunscreen use amongst adolescents and to compare the predictive utility of the theory of planned behavior, descriptive norms, prototype perceptions and planning. In Study 1, a belief elicitation study with N = 67 adolescents identified beliefs about, and strategies for, sunscreen use. In Study 2, N = 177 adolescents completed measures of direct and belief-based theory of planned behavior measures prototype evaluation and similarity, descriptive norms and planning. Sunscreen use was reported 2 months later. In Study 1, sunburn prevention and skin care emerged as the most relevant consequences of sunscreen use. Facilitators were supportive family norms. Sunscreen properties, costs and forgetting were main barriers which were commonly addressed with preparatory actions such as carrying sunscreen. In Study 2, gender, intention and prototype evaluation were predictive of sunscreen use. Positive evaluations of those who use sunscreen were related to lower sunscreen use when controlling for intention, descriptive norm and gender. Belief-based measures were the best predictors of intention. Behavioral, normative and control beliefs are crucial for understanding sunscreen. Future interventions should focus on these beliefs to change intentions. 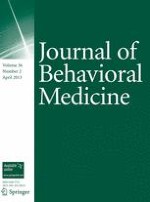 Purpose in life and reduced risk of myocardial infarction among older U.S. adults with coronary heart disease: a two-year follow-up

Testing the relation between dispositional optimism and conditioned pain modulation: does ethnicity matter?

Conscientiousness and stress exposure and reactivity: a prospective study of adolescent females

Adults with cardiovascular disease who help others: a prospective study of health outcomes