Given the consideration of callousness as a specifier for Conduct Disorder in the DSM-V, it seems imperative that researchers continue to investigate this personality style in adolescents to determine both its applicability and utility. The present study examined the Youth Psychopathic traits Inventory (YPI; Andershed et al. 2002) and the Interpersonal Adjective Scale Revised-Big 5 (IASR-B5; Trapnell and Wiggins 1990a, b) psychopathy scales in relation to the Five Factor Model (FFM) of personality. Using a sample of adolescent offenders (N = 145), the YPI and IASR-B5 psychopathy scales showed adequate reliability and strong inverse bivariate relations with the FFM domains of Agreeableness (−A) and Conscientiousness (−C). Multivariate analyses, at the facet level, revealed that Tendermindedness (−A) and Assertiveness (+E) explained the association between FFM facets and the YPI, whereas Altruism (−A), Modesty (−A), Straightforwardness (−A), Assertiveness (+E), Warmth (−E), and Deliberation (+C) all uniquely contributed to the IASR-B5 psychopathy scale. Both measures were linked with general and violent recidivism. The authors discuss the implications of these findings in terms of the use of personality to help describe conduct problem youth and the need for future research in this important area.
vorige artikel Measuring Relational Aggression in Middle Childhood in a Multi-Informant Multi-Method Study
volgende artikel Cluster A Personality Disorders: Schizotypal, Schizoid and Paranoid Personality Disorders in Childhood and Adolescence 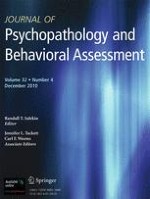 Cluster A Personality Symptomatology in Youth

Current Considerations in the Assessment of Youth Narcissism: Indicators of Pathological and Normative Development

Development and Psychometric Evaluation of the Suicide Anger Expression Inventory—28