To present psychometric information and studies dealing with questionnaires for age-related macular degeneration (AMD) and visually impaired patients in addition to the study by Finger et al. “Quality of life in AMD: a review of available vision-specific psychometric tools”. We propose that their literature search should not have focused solely on the specific eye disease AMD.

The literature search was partly replicated (PubMed) by using “visual impairment” instead of “macular degeneration” as free text words. Psychometric information was obtained from the additional studies. Preliminary results from a differential item functioning (DIF) analysis used to examine the relationship between item responses on the Vision-related quality of life Core Measure (VCM1) of AMD patients versus patients with other eye conditions are discussed.

Eight studies of visually impaired patient populations, including AMD patients, are discussed, with psychometric information from six vision-specific questionnaires. The VCM1 items did not present DIF, which means that the items were equally interpreted by all patients. 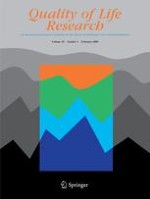 The applications of PROs in clinical practice: what are they, do they work, and why?