Recent theories have stressed the role of effect anticipation in action control. Such a mechanism requires the prior acquisition of integrated action-effect associations. The strength of such associations should directly depend on the amount of learning, and therefore be most pronounced in motor experts. Using an interference paradigm, we investigated whether evidence of such representations can be demonstrated in expert pianists. Participants were required to play chords on a keyboard in response to imperative visual stimuli. Concurrently, task-irrelevant auditory stimuli (“potential” action effects) were presented that were congruent or incongruent with the chords to be played. In Experiment 1 we found evidence that expert pianists, compared with non-musicians, have acquired such action-effects representations. Response times were slower when the auditory stimulus was incongruent with the required response. In order to ascertain the locus of interference, we varied imperative stimuli and responses in Experiments 2 and 3. The results indicate that, for the most part, interference occurs on the response level rather than on an abstract level. However, the perception of action effects also evokes processing of abstract features, like the concept of major–minor mode. 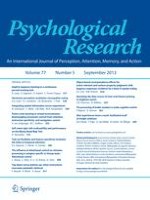 On the difference between response inhibition and negative priming: Evidence from simple and selective stopping