Acting in perspective: the role of body and language as social tools | mijn-bsl Skip to main content
TOOLBAR 1 2 3 4
ZOEKEN MENU 1 2 3 4

We investigated how the reach-to-grasp movement is influenced by the presence of another person (friend or non-friend), who was either invisible (behind) or located in different positions with respect to an object and to the agent, and by the perspective conveyed by linguistic pronouns (“I”, “You”). The interaction between social relationship and relative position influenced the latency of both maximal fingers aperture and velocity peak, showing shorter latencies in the presence of a non-friend than in the presence of a friend. However, whereas the relative position of a non-friend did not affect the kinematics of the movement, the position of a friend mattered: latencies were significantly shorter with friends only in positions allowing them to easily reach for the object. Finally, the investigation of the overall reaching movement time showed an interaction between the speaker and the pronoun: participants reached the object more quickly when the other spoke, particularly if she used the “I” pronoun. This suggests that speaking, and particularly using the “I” pronoun, evokes a potential action. Implications of the results for embodied cognition are discussed. 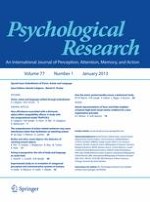 How the motor system handles nouns: a behavioral study

Bodies and other visual objects: the dialectics of reaching toward objects