Acquisition of landmark, route, and survey knowledge in a wayfinding task: in stages or in parallel? | mijn-bsl Skip to main content
ZOEKEN MENU 1 2 3 4

According to an influential concept, humans acquire spatial knowledge about their environment in three distinct stages: landmark knowledge is acquired first, then route knowledge, and finally survey knowledge. The stage concept has been challenged by studies which observed that in a wayfinding paradigm, route, and survey knowledge emerge at the same time and; therefore, were seemingly acquired in parallel. However, this experimental evidence is not conclusive because the above studies suffered from a ceiling effect. The present study was designed to overcome the ceiling effect by increasing the complexity of the wayfinding task. We asked 60 young participants to find their way through an urban environment rendered in virtual reality, and assessed their landmark, route, and survey knowledge after each of ten trials. We found that all three types of knowledge gradually increased from the first to the last trial. We further found that correlations between the three types of knowledge increased from trial to trial. This outcome disagrees profoundly with the stage concept, but is compatible with the parallel concept. Specifically, it is in accordance with the view that landmark, route, and survey knowledge are acquired by multiple overlapping and interacting processes: those processes may start out more or less independently in the first trial but, due to common constraints or synergies, may gradually increase their cooperation during subsequent trials.
vorige artikel No power: exponential expressions are not processed automatically as such
volgende artikel Does musical interaction in a jazz duet modulate peripersonal space?

Titel
Acquisition of landmark, route, and survey knowledge in a wayfinding task: in stages or in parallel?
Auteurs
Kyungwan Kim
Otmar Bock 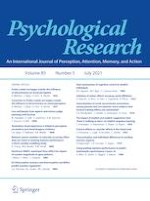