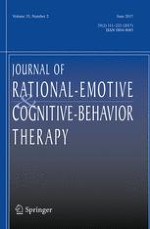 Cognitive Reactivity in Depressed Outpatients: How Different is Severe Depression?