The online version of this article (https://​doi.​org/​10.​1007/​s10964-020-01272-4) contains supplementary material, which is available to authorized users.
Publisher’s note Springer Nature remains neutral with regard to jurisdictional claims in published maps and institutional affiliations.

Much has been established about the short-term consequences of missing school, yet little is known about the longer-term outcomes of absenteeism. To address this gap in knowledge, the current study considered the consequences of school absenteeism between kindergarten and eighth grade for the behavioral, economic, and educational outcomes of young adults. Participants were drawn from the National Institute of Child Health and Human Development Study of Early Child Care and Youth Development (age 22–23; 54% female and 86% White, n = 648). The findings indicated that individuals who were more regularly absent from school were not more frequently engaged in risky, deviant, or criminal behaviors in young adulthood. However, those who were more regularly absent described being less likely to be politically engaged, reported themselves as experiencing greater economic difficulties, with less optimal educational outcomes, and as marginally more likely to have a child. The outcomes of absenteeism were largely cumulative and there was little evidence to suggest that the outcomes of absenteeism varied across urban and rural communities or as a function of socioeconomic status. Taken together, this study provides new insight into the long-term consequences of missing school and points to the importance of addressing absenteeism in the first ten years of students’ educational careers. 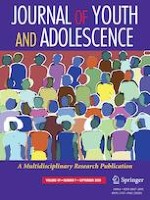 Developmental changes in associations between depressive symptoms and peer relationships: a four-year follow-up of Chinese adolescents

Explaining Health Disparities between Heterosexual and LGB Adolescents by Integrating the Minority Stress and Psychological Mediation Frameworks: Findings from the TRAILS Study

Correction to: School Security Measures and Longitudinal Trends in Adolescents’ Experiences of Victimization