Despite significant progress in research on the treatment and prevention of psychological, behavioral, and health problems, the translation of this knowledge into population-wide benefit remains limited. This paper reviews the state of America’s children and families, highlighting the influence of stressful contextual and social conditions on child and family well-being and the concentration of disadvantage in numerous neighborhoods and communities throughout the nation. It then briefly reviews the progress that has been made in pinpointing policies that can reduce stressful contextual conditions such as poverty, discrimination, and the marketing of unhealthful foods and substances. It also describes numerous family and school interventions that have proven benefit in preventing psychological and behavioral problems as diverse as tobacco, alcohol, and other drug use; depression; antisocial behavior; academic failure; obesity prevention; and early childbearing. We argue that progress in translating existing knowledge into widespread benefit will require a nationwide effort to intervene comprehensively in neighborhoods and communities of concentrated disadvantage. We present a strategic plan for how such an effort could be organized. The first step in this organizing would be the creation of a broad and diverse coalition of organizations concerned with advancing public health and well-being. Such a coalition could increase public support both for the policies needed to focus on these disadvantaged areas and the research needed to incrementally improve our ability to help these areas. 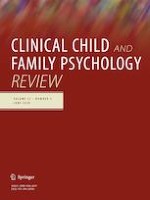 Parents’ Perceptions and Experiences of Parenting Programmes: A Systematic Review and Metasynthesis of the Qualitative Literature

Fearful Temperament and the Risk for Child and Adolescent Anxiety: The Role of Attention Biases and Effortful Control

A Cognitive Model of Pathological Worry in Children and Adolescents: A Systematic Review

Is Callous Always Cold? A Critical Review of the Literature on Emotion and the Development of Callous–Unemotional Traits in Children

Optimising Evidence-Based Psychological Treatment for the Mental Health Needs of Children with Epilepsy: Principles and Methods