Attention Training (ATT) is a technique used in metacognitive therapy but it has also been shown to produce stand-alone effects. The present study replicates and extends an earlier study of the effects of ATT on traumatic-stress symptoms. A sample of 60 university students who reported a traumatic life event were randomly assigned to either an ATT group (n = 29) or a control group (n = 31). They were exposed to a recorded narrative of their stressful experience before and after the intervention and the primary outcomes were frequency of intrusions and negative affect reported. Secondary outcomes included self-report and performance-based measures of attention flexibility. ATT significantly reduced intrusions and improved negative affect in individuals who had experienced a stressful life event. The technique also appeared to reduce self-focused attention, increase attention flexibility and modified performance on an emotional attention set shifting task. The results suggest that ATT can be beneficial in reducing specific traumatic stress symptoms.
vorige artikel Metacognitive Theory, Therapy and Techniques: Introduction to the Special Issue
volgende artikel Group Metacognitive Therapy for Severe Antidepressant and CBT Resistant Depression: A Baseline-Controlled Trial 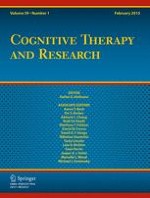 Metacognitive Theory, Therapy and Techniques: Introduction to the Special Issue