This study examined the psychometric properties of a Hebrew version of the Behavioral Inhibition Questionnaire (BIQ) in a non-clinical sample of Israeli children and adolescents. We produced a Hebrew translation of the BIQ and collected 227 responses to it from parents of children aged 4–15. Some respondents in the larger sample also completed the Screen for Child Anxiety Related Emotional Disorders (SCARED) questionnaire (n = 91) and the Conners’ Abbreviated Parent-Teacher (CONNERS) questionnaire (n = 39), in addition to the BIQ. Lastly, 21 children of BIQ respondents (aged 8–14) completed a self-report version of the questionnaire. Confirmatory factor analysis (CFA) was performed to assess how well the established six correlated factor model of the BIQ applied to the sample data. The Hebrew BIQ demonstrated good internal consistency (Chronbach’s α = .94, n = 227) and 3 month test–retest reliability, (r = .95, p < .001, n = 21). It also showed both convergent validity, as scores on the BIQ were correlated with the SCARED (r = .66, p < .01. n = 91), and discriminant validity, as BIQ scores were not correlated with the CONNERS (r = .24, n = 39). Finally, mother reports of BI were significantly correlated to child reports of BI via the BIQ (r = .60, p < .01, n = 21). Thus, through this preliminary study we demonstrated that the Hebrew version of the BIQ is an effective tool for screening for BI among Israeli children, making it a useful instrument for future research.
vorige artikel Psychometric Properties of the Parenting Efficacy Scale among Parents during the Postnatal Period in Singapore
volgende artikel The Development, Psychometric Analyses and Correlates of a Self-Report Measure on Disorganization and Role Reversal 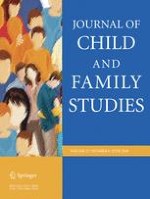 The Feasibility, Appropriateness, Meaningfulness, and Effectiveness of Parenting and Family Support Programs Delivered in the Criminal Justice System: A Systematic Review