Given the recent proliferation of mindfulness and acceptance-based therapies, there is a growing need for clarification of the construct of mindfulness and how to evaluate its progression during these treatments. Although mindfulness has been conceptualized as a process, it has been primarily operationalized as an outcome; therefore, important aspects of this construct may be overlooked in current research. This two-part study presents a theoretical examination of mindfulness as a process, along with the preliminary development of a new, process-oriented mindfulness questionnaire (Mindfulness Process Questionnaire [MPQ]) to measure and further investigate this conceptualization of mindfulness. In Study 1, 410 participants from an urban university campus completed measures of mindfulness, emotional responding, and well-being. We examined the relationship between the MPQ and both the Mindful Attention Awareness Scale and the Five Facet Mindfulness Questionnaire, as well as the incremental ability of the new measure to predict outcomes of interest, including psychological symptoms, emotional processing, and well-being. Findings from Study 1 indicate that the MPQ captures a unique aspect of mindfulness, beyond what is already measured by existing mindfulness questionnaires. In Study 2, 18 participants were randomly assigned to an Acceptance-Based Behavioral Therapy condition for generalized anxiety disorder. We examined the ability of the changes in MPQ scores from pre- to posttreatment to predict changes in similar outcomes of interest, including psychological symptoms, emotional processing, and well-being. Consistent with findings from Study 1, results suggest a significant relationship between the MPQ and these outcome measures, indicating a need for further study.
vorige artikel Mindfulness to Reduce Psychosocial Stress
volgende artikel For Whom May Participation in a Mindfulness-Based Stress Reduction Program be Contraindicated? 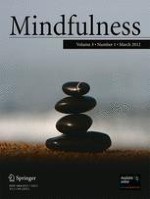 For Whom May Participation in a Mindfulness-Based Stress Reduction Program be Contraindicated?