publish
Publiceer nu
Some adults and children exhibit defensive behaviors to tactile or auditory stimulation. These symptoms occur not only in subsets of children with ADHD, autism, and Fragile X syndrome, but also in the apparent absence of accompanying disorders. Relatively little research explores the correlates and antecedents of sensory defensiveness. Using a population-based sample of 1,394 toddler-aged twins, mothers reported on tactile and auditory defensiveness, temperament, and behavior problems. The incidence of defensive symptoms was widely distributed, with some accumulation of cases in the extreme range. Girls were overrepresented in the extreme tactile defensiveness group. Both auditory and tactile defensiveness were modestly associated with fearful temperament and anxiety, but they were relatively distinct from other common dimensions of childhood behavioral dysfunction. Twin correlations for the full range of scores and concordance rates for the extremes suggested moderate genetic influences, with some indication that the tactile domain might be more heritable than the auditory domain.
vorige artikel The Short Mood and Feelings Questionnaire (SMFQ): A Unidimensional Item Response Theory and Categorical Data Factor Analysis of Self-Report Ratings from a Community Sample of 7-through 11-Year-Old Children
volgende artikel The Development of Aggression in 18 to 48 Month Old Children of Alcoholic Parents 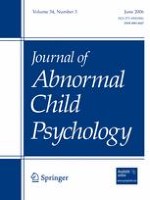 Links Between Antisocial Behavior and Depressed Mood: The Role of Life Events and Attributional Style