To examine the preliminary effects of the mindfulness-based stress reduction (MBSR) program in the management of biopsychosocial stress–related changes associated with Parkinson’s disease (PD) among patient/caregiving-partner dyads.

PD patient/caregiving-partner dyads (N = 18) early in the disease trajectory were recruited from a university-affiliated movement disorders clinic and were randomized (1:1) to either the MBSR intervention or the control condition (treatment as usual [TAU]). Mixed methods ANOVAs were conducted to examine primary outcomes (disease-specific distress, perceived social support, circadian rhythmicity [cortisol], and markers of inflammation [IL-6, TNF-alpha, IL-1beta]) between groups (MBSR vs. TAU) among patients and caregiving partners separately.

No participants were lost to follow-up. Given the pilot nature of the current investigation, findings should be interpreted as exploratory opposed to confirmatory. Following MBSR, PD patients reported an increase in disease-specific distress and intrusive thoughts and demonstrated a decrease in mean bedtime cortisol and IL-1beta from baseline to follow-up compared to TAU. Caregiving partners who received MBSR reported an increase in perceived social support and demonstrated improved rhythmicity of diurnal cortisol slopes from baseline to follow-up compared to TAU.

Both patients and caregiving partners who received MBSR demonstrated improvements in biomarkers of circadian function, and patients evidenced a decrease in a biomarker of systemic inflammation, pointing to an important area of further investigation. Given that patients reported an increase in disease-specific distress and intrusive thoughts, the salutary effects of MBSR may be experienced physiologically prior to, or in lieu of, psychological effects, although this should be explored further, especially given the improvement in perceived social support reported by caregiving partners.
Opmerkingen

PD patient/caregiving-partner dyads were recruited from a Movement Disorders Clinic specializing in PD at a University-affiliated Rehabilitation Institute. Patients were referred by collaborating physicians and/or medical records were screened using patient eligibility criteria. Inclusion criteria for patient participants consisted of (1) a diagnosis of idiopathic PD within 3 years based on the UK PD Brain Bank criteria (Gibb & Lees, 1988); (2) stage II or III according to the Hoehn and Yahr Parkinson’s Disease Severity Scale (Hoehn & Yahr, 1998); (3) adequate cognitive functioning defined as a score ≥ 25 on the Mini-Mental Status Examination (MMSE; Folstein et al. (1983); (4) ≥ 40 years of age; and (5) proficiency in written and spoken English. Eligible caregiving partners identified as the “primary caregiver” for the patient were required to provide ≥ 4 h of care per day, demonstrate adequate cognitive functioning (MMSE score ≥ 28), and be proficient in written and spoken English. Exclusion criteria for both patients and caregiving partners included a serious medical or psychological illness that would preclude participation and use of systemic hydrocortisone-based steroids that could interfere with accurate salivary cortisol assessment.
Eligible dyads were identified by systematic chart review and were introduced to study personnel by collaborating physicians during a medical appointment at the clinic. Study personnel provided information about the study. Of the 141 patients screened over the course of approximately 6 months, 86 were determined eligible, and 19 eligible and interested dyads enrolled in the IRB-approved study. One dyad withdrew shortly after consenting due to scheduling conflicts with study activities. The final sample consisted of eighteen dyads (N = 36).
Participants reported on clinical and demographic characteristics and factors known to affect cortisol secretion (e.g., medication, alcohol, tobacco, caffeine). See Table 1 for a description of sample demographics.
Table 1
Sample characteristics (N = 36)
†Six caregiving partners did not provide demographic information on education, income, employment status, or living situation due to inadvertent changes in the demographic questionnaire part-way through the study

After eligible dyads were introduced to study personnel, trained graduate students conducted a brief mental status evaluation to confirm adequate cognitive functioning. Study physicians re-assessed PD staging criteria. Eligible patients and caregiving-partner dyads jointly attended two baseline assessment sessions held at a university laboratory. During the first session, each participant provided informed consent. Patients completed two physical movement tests, the Berg Balance Scale (Qutubuddin et al., 2005) and the Get up and Go Test (Morris et al., 2001), to ensure their ability to participate in the yoga portion of MBSR. Partners completed a brief interview on their caregiving experience. Both patients and caregiving partners were provided home-based data collection materials that included instructions, questionnaires assessing factors that could influence cortisol sampling, and a salivary cortisol collection kit containing salivettes. Participants were asked to collect three saliva samples per day for three consecutive days (a total of nine samples) immediately upon waking (prior to getting out of bed), 30 min after waking, and at bedtime. Participants were instructed not to put anything in their mouths 30 min prior to collecting a sample and to store samples in the refrigerator.
During the second session in the laboratory, patient/caregiving-partner dyads returned completed at-home data collection materials and provided a blood sample for immune marker assessment. Patient/caregiving-partner dyads were then blindly and randomly assigned (1:1) to an 8-week MBSR intervention or treatment as usual (TAU) by study personnel who did not have contact with participants. Dyads randomly assigned to the control condition received usual medical care and adjunct treatment recommended by their physician (e.g., physical therapy).
Dyads randomly selected for the MBSR intervention completed the program at an off-site location unaffiliated with the hospital clinic. The intervention was led by a faculty licensed clinical psychologist with MBSR training from the UMASS Center for Mindfulness. The present MBSR intervention consisted of eight, 2-h, weekly sessions, and a day-long meditation retreat (see Table 2). Participants were encouraged to complete home-based meditation practice for 30–45 min per day, 6 days per week, individually or with their caregiving partner. They were provided a workbook, pre-recorded meditation tracks, and a log to track their mindfulness practice.
Table 2
MBSR intervention
All participants regardless of condition (MBSR or TAU) returned to the laboratory within 1 week of the conclusion of the intervention for follow-up assessment. Follow-up data collection mirrored baseline data collection procedures (i.e., an initial visit, at-home data collection, and a subsequent visit to return materials and conduct a blood draw).

The Impact of Events Scale (IES) is a 15-item self-report measure assessing the impact of events perceived as distressing (Horowitz et al., 1979). When responding to items on the measure, patients and caregiving partners were asked to consider the impact of the PD diagnosis and treatment. A total score was calculated by summing all items. Two subscales, intrusion and avoidance, were calculated by taking the average of 8 items. Greater scores indicate greater levels of disease-specific distress. Among the combined sample of PD patients and caregivers, the IES demonstrated strong reliability at baseline and follow-up, respectively (Cronbach’s α = 0.92, 0.89; McDonald’s ω = 0.92, 0.88).

The Interpersonal Support Evaluation List (ISEL) is a 40-item self-report measure designed to assess the perceived availability of social report and overall functional support (Cohen & Hoberman, 1983). It contains four 12-item subscales: tangible, appraisal, self-esteem, and belonging. Caregiving partners were instructed to indicate how frequently they felt the items were true regarding their partner’s diagnosis and treatment of PD. Greater scores on the ISEL suggest a greater degree of perceived social support. Among the combined sample of PD patients and caregiving partners, the ISEL demonstrated strong reliability at both baseline and follow-up, respectively (Cronbach’s α = 0.93, 0.95; McDonald’s ω = 0.92, 0.94).

Each participant collected a total of nine cortisol samples at home for three consecutive days at waking, 30 min after waking, and bedtime. Once returned to the laboratory, samples were centrifuged, aliquoted, and frozen at − 80 °C until assay. Cortisol levels were assessed using a luminescence immunoassay (IBL International, Hamburg, Germany). Assay sensitivity was 0.003 ug/dL. Inter-assay CV was 8.98% using the low control and 5.95% using the high control. Intra-assay CV was 10.2% for the low control and 7.2% for the high control. Raw cortisol values were log-transformed to correct for skew, from which three parameters were calculated: overall mean cortisol, mean bedtime cortisol, and diurnal cortisol slope. Overall mean cortisol was calculated from all sample times across the 3 days and mean bedtime cortisol was calculated from all bedtime samples across 3 days. Diurnal cortisol slope was calculated excluding post-waking samples using the unstandardized beta of natural log-transformed cortisol regressed on collection time (Kraemer et al., 2006). Samples collected less than 30 min or more than 60 min after waking for the “post-wake” sample were excluded (n = 4).

Two blood samples were collected per participant at both baseline and follow-up. One tube was centrifuged (spun at 1300 RCF for 10 min and 25 °C), aliquoted, and frozen at − 80 °C within 2 h of blood draw. Serum was assayed using R&D Systems EIA to quantify IL-6. The intra-assay and inter-assay CVs for the high control were 4.54% and 5.74%, respectively, for IL-6. The second tube of heparinized whole blood was incubated for 24 h with phytohemagglutinin (PHA), a T-cell mitogen and initiator of mitotic activity, under a sterile biological hood. The media plate that was used was removed from the freezer and thawed for 45–60 min in the CO2 incubator prior to use. The stimulated samples were microcentrifuged for 5 min at 12,000 rpm and 4 °C, aliquoted, frozen at − 80 °C, and assayed using R&D Systems EIA for TNF-alpha and IL-1beta. Because results were too low to read with the standard curve, assays were diluted. The diluted intra-assay and inter-assay CVs for the high control were 10.35% and 7.58% for TNF-alpha and 3.99% and 5.24% for IL-1beta, respectively. Values that fell > 4 standard deviations from the mean were considered outliers and excluded (IL-6: n = 1, IL-1beta: n = 3). Two samples were excluded due to limited sample.

Despite evidence for improvements to health markers among patients and caregiving partners randomized to MBSR, limitations to the present study should be acknowledged. Due to the heterogeneity of the current sample, the generalizability of findings is limited to patients and caregiving partners early in the disease trajectory that identify as White, are primarily retired (53%), and are well resourced ($60,000–$80,000 median income). MBSR is a time-intensive intervention involving physical and cognitive practices rooted in Buddhist traditions that may not be feasible or accepted among patients and caregiving-partner dyads further in the disease trajectory and from other sociodemographic backgrounds. This remains to be tested and should be prioritized in future investigations. Given the relatively small sample size and pilot design, results should be interpreted with caution. The limited sample size did not allow for statistical examination of dyadic effects across the intervention. In other words, because the results of the current analysis do not account for the shared variance within a dyad, it is unclear if synergistic benefits occurred within a dyad due to co-participation. Future studies with greater statistical power should examine potential “crossover” effects of dyadic participation in MBSR to further clarify the benefits of simultaneous inclusion of caregiving partners. Lastly, we acknowledge the limitations associated with the use of TAU as a control condition (Kazdin, 2015), but remain encouraged by the promising results of the current investigation. Further examination into the effects of MBSR among PD patient-caregiver dyads in a more robust trial is warranted.

This study was approved by the Institutional Review Board at the University of Louisville.

The authors declare no competing interests.
Open AccessThis article is licensed under a Creative Commons Attribution 4.0 International License, which permits use, sharing, adaptation, distribution and reproduction in any medium or format, as long as you give appropriate credit to the original author(s) and the source, provide a link to the Creative Commons licence, and indicate if changes were made. The images or other third party material in this article are included in the article's Creative Commons licence, unless indicated otherwise in a credit line to the material. If material is not included in the article's Creative Commons licence and your intended use is not permitted by statutory regulation or exceeds the permitted use, you will need to obtain permission directly from the copyright holder. To view a copy of this licence, visit http://​creativecommons.​org/​licenses/​by/​4.​0/​. 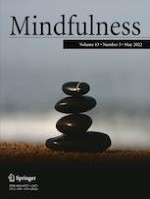