» Naar de samenvatting
A 49-year-old woman was admitted for an electrophysiology study and ablation of recurrent episodes of symptomatic narrow complex tachycardia. Through a right inguinal vascular approach, a deflectable decapolar and a non-deflectable quadripolar electrophysiology catheter were placed into the cardiac chambers following the trajectory depicted in Fig.  1. In addition, using a right subclavian venous approach, a 4 mm non-irrigated tip ablation catheter (Celsius, Biosense Webster, USA) was used to map the triangle of Koch.
×
Typical atrioventricular nodal re-entrant tachycardia (AVNRT) was diagnosed at the electrophysiology study, and a slow pathway (SP) ablation was successfully performed at the right posteroseptal region in the usual fashion. There were no complications, and no recurrences of the tachycardia at follow-ups.
What is the vascular abnormality that accounts for the peculiar route through which the 2 electrophysiology catheters from the right inguinal region were placed in the heart?

You will find the answer elsewhere in this issue.
Open Access This article is licensed under a Creative Commons Attribution 4.0 International License, which permits use, sharing, adaptation, distribution and reproduction in any medium or format, as long as you give appropriate credit to the original author(s) and the source, provide a link to the Creative Commons licence, and indicate if changes were made. The images or other third party material in this article are included in the article’s Creative Commons licence, unless indicated otherwise in a credit line to the material. If material is not included in the article’s Creative Commons licence and your intended use is not permitted by statutory regulation or exceeds the permitted use, you will need to obtain permission directly from the copyright holder. To view a copy of this licence, visit http://​creativecommons.​org/​licenses/​by/​4.​0/​. 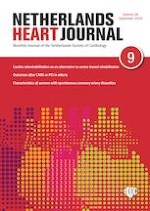 ST-segment elevation in a patient with cardiac lymphoma