The online version of this article (https://​doi.​org/​10.​1007/​s12471-019-01324-w) contains supplementary material, which is available to authorized users.
A 42-year-old female patient, a cigarette smoker with no known medical history, was referred for emergency coronary angiography because of acute coronary syndrome (ACS). She presented with sudden-onset chest pain associated with electrocardiographic evidence of ischaemia (Fig.  1a). Her blood pressure was 90/25 mm Hg. The right radial artery pulse was non-palpable. Thus we performed transfemoral coronary angiography, which showed no evidence of atherosclerosis but a smooth-bordered ostial and mid-shaft left main coronary artery (LMCA) stenosis with dynamic compression and almost complete lumen obliteration during diastole (Fig.  1b, c; Electronic Supplementary Material, Video 1). We suspected proximal aortic dissection (AD), which was confirmed by emergency echocardiography (Electronic Supplementary Material, Video 2). Indeed, LMCA pulsation was due to retrograde extension of the aortic false lumen into the LMCA causing diastolic compression of the true coronary lumen. The patient underwent a successful AD repair with Bentall’s procedure and hemi-arch replacement and patch repair of the dissected LMCA.
×
Acute proximal AD is complicated by retrograde dissection into either or both coronary ostia in 5.7–15% of cases [ 1, 2]; misdiagnosis with ACS may have a fatal outcome [ 3]. Dynamic LMCA lumen compromise during diastole is highlighted herein as a subtle and rare angiographic finding that should alert the interventional cardiologist to possible proximal AD extending into the LMCA.

A.Y. Andreou, A. Karyou and A. Argyrou declare that they have no competing interests.
Open Access This article is distributed under the terms of the Creative Commons Attribution 4.0 International License ( http://​creativecommons.​org/​licenses/​by/​4.​0/​), which permits unrestricted use, distribution, and reproduction in any medium, provided you give appropriate credit to the original author(s) and the source, provide a link to the Creative Commons license, and indicate if changes were made.

Titel
A patient with chest pain and a pulsating left main coronary artery
Auteurs:
A. Y. Andreou
A. Karyou
A. Argyrou 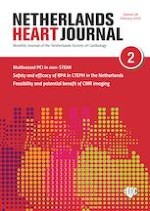