Mindfulness-based interventions have demonstrated to be effective in reducing stress and health complaints in clinical populations. However, to our knowledge, biological health markers have not been used in studies of the effectiveness of mindfulness programs in caregivers of people with autism spectrum disorders (ASDs). This study aimed to assess the effects of a mindfulness intervention on mood disturbances and health complaints in this population compared with non-caregivers. The design of the study was quasi-experimental, with repeated measures. Self-reported health, cortisol awakening response (CAR), and afternoon cortisol levels before and after a mindfulness session were assessed at the beginning, middle, and end of the intervention. There was a significant reduction in mood disturbances and afternoon cortisol levels during the sessions in all participants, with the reductions being more pronounced in caregivers. Moreover, all participants showed fewer depressive and somatic symptoms at the end of the program, with an improvement in their self-perceived general health. Nevertheless, the CAR levels had not changed significantly after the program. Overall, these results indicate that mindfulness group therapy could be effective for reducing health complaints and reinforce the validity of these programs for caregivers. 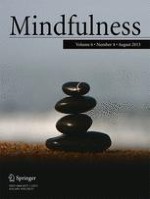 Self-Compassion and Well-Being in Parents of Children with Autism

Effects of Training Staff in MBPBS on the Use of Physical Restraints, Staff Stress and Turnover, Staff and Peer Injuries, and Cost Effectiveness in Developmental Disabilities

A Qualitative Analysis of Experiential Challenges Associated with Meditation Practice