Several studies have shown that mindfulness-based programs (MBPs) may bring promising benefits for youth. However, little is known about its efficacy in specific clinical populations and even less about the psychological processes that underlie the changes. This study investigates the efficacy of a MBP among a population of adolescent boys with behavior disorders and explores the mediating role of impulsivity in the observed changes. Participants included 48 adolescents presenting conduct disorders and mild cognitive impairments, living in a residential service for youth in Belgium. Two groups of 24 adolescents aged 12 to 19 years have been constituted. Only the experimental group followed a MBP. The program was divided into two parts: the first 6 sessions were devoted to group dynamic and introduction to emotional skills whereas the second part focused on mindfulness exercises. The level of depression and impulsivity as well as the symptomatology of attention deficit hyperactivity disorder were assessed before, during and after the program for both groups. Results showed that both groups decreased their depressive symptomatology but only the MBP group decreased in impulsivity and externalizing symptomatology. No mediating effects of the facets of impulsivity on the outcomes were found. MBPs may bring psychological benefits for adolescents who suffer from behavior disorders but further research on the efficacy of MBPs among this population is needed. 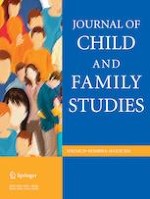 “Bullets Have no Names”: A Qualitative Exploration of Community Trauma Among Black and Latinx Youth

Linking Attachment and Executive Function Systems: Exploring Associations in a Sample of Children of Young Mothers

Trauma and Parenting Beliefs: Exploring the Ethnotheories and Socialization Goals of Palestinian Mothers