This study sought to establish four aspects of feasibility for a mindful parenting program: demand for the program from parents with concerns regarding their child’s internalizing problems, acceptability of the program to those parents, preliminary efficacy, and the likelihood of successful expansion of the program to the intended population.

Feasibility was established for the four aspects assessed. The program was well-attended and acceptable to parents. Moderate to large effects were found in favor of the intervention group for most parent and child outcomes. Weekly data showed improved coping in difficult parenting situations. Qualitative feedback suggested that parents believed that increased acceptance and empathy had helped them cope with child internalizing problems. 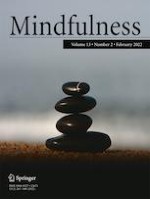 The Role of Executive Function in Children’s Mindfulness Experience