The purpose of this study is to estimate the extent to which people aging with HIV meet criteria for successful aging as operationalized through HRQL and maintain this status over time. A second objective is to identify factors that place people at promise for continued successful aging, including environmental and resilience factors.

Participants were members of the Positive Brain Health Now (BHN) cohort. People ≥ 50 years (n = 513) were classified as aging successfully if they were at or above norms on 7 or 8 of 8 health-related quality of life domains from the RAND-36. Group-based trajectory analysis, regression tree analysis, a form of machine learning, and logistic regression were applied to identify factors predicting successful aging.

73 (14·2%) met criteria for successful aging at entry and did not change status over time. The most influential factor was loneliness which split the sample into two groups with the prevalence of successful aging 28·4% in the “almost never” lonely compared to 4·6% in the “sometimes/often” lonely group. Other influential factors were feeling safe, social network, motivation, stigma, and socioeconomic status. These factors identified 17 sub-groups with at least 30 members with the proportions classified as aging successfully ranging from 0 to 79·4%. The nine variables important to classifying successful aging had a predictive accuracy of 0.862. Self-reported cognition but not cognitive test performance improved this accuracy to 0.895. The two groups defined by successful aging status did not differ on age, sex or viral load, nadir and current.

The results indicate the important role of social determinants of health in successful aging among people living with HIV.
vorige artikel Prevalence vs impact: a mixed methods study of survivorship issues in colorectal cancer
volgende artikel Willingness to report treatment-related symptoms of immunotherapy among patients with non-small cell lung cancer 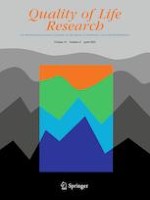 A framework to make PROMs relevant to patients: qualitative study of communication preferences of PROMs

BMI and dissatisfaction with life: contextual factors and socioemotional costs of obesity

Correction to: Missing data strategies for the Patient-Reported Outcomes version of the Common Terminology Criteria for Adverse Events (PRO-CTCAE) in Alliance A091105 and COMET-2

Quality of life among women with symptomatic, screen-detected, and interval breast cancer, and for women without breast cancer: a retrospective cross-sectional study from Norway

A comparison of the influencing factors of chronic pain and quality of life between older Koreans and Korean–Americans with chronic pain: a correlational study