Although great strides have recently been made in our understanding of relational aggression and its consequences, one significant limitation has been the lack of prospective studies. The present research addressed this issue by identifying and assessing groups of relationally aggressive, physically aggressive, relationally plus physically aggressive (co-morbid), and nonaggressive children during their third grade year in elementary school and then reassessing them a year later, during fourth-grade (N = 224, 113 girls). Two aspects of social–psychological adjustment were assessed during both assessment periods including internalizing difficulties (i.e., withdrawal, depression/anxiety, and somatic complaints) and externalizing problems (i.e., aggressive behavior, delinquency). It was revealed that the strongest predictor of future social–psychological adjustment problems and increases in these problems from third to fourth was the combination of relational and physical aggression. Relational aggression also contributed unique information, relative to physical aggression, in the prediction of future maladjustment. Implications of these findings for future research and prevention efforts, particularly for aggressive girls, are discussed.
volgende artikel The Best Friendships of Shy/Withdrawn Children: Prevalence, Stability, and Relationship Quality 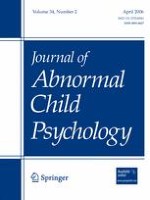 Cognitive Correlates of Social Phobia Among Children and Adolescents

Determinants of Multiple Informant Agreement on Child and Adolescent Behavior