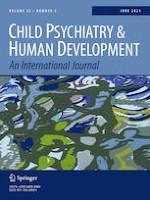 A New Compassion Scale for Children and Its Psychometric Properties

Dynamics of Child soldiers’ Psychosocial Rehabilitation and Well-being: Perspectives from Bioecological Systems Theory in the Democratic Republic of Congo

The Bright Side of Grit in Burnout-Prevention: Exploring Grit in the Context of Demands-Resources Model among Chinese High School Students