A Large Scale Study of the Psychometric Characteristics of the IBR Modified Overt Aggression Scale: Findings and Evidence for Increased Self-Destructive Behaviors in Adult Females with Autism Spectrum Disorder | mijn-bsl Skip to main content
ZOEKEN MENU 1 2 3 4

The psychometric characteristics of the IBR Modified Overt Aggression Scale were studied in over 2,000 people with Intellectual Disability (ID). Reliability ranged from good to excellent. Aggression toward others and objects was highest in the youngest adults, in those in the moderate to severe range of ID, and in those with an autism spectrum diagnosis. Self-injury was highest in those in the severe to profound range of ID and in those with autism, particularly the females. Females with autism were also more likely to make the most self-deprecating statements. Our data suggest that adult females with autism are a unique group and support the notion that mood and anxiety disorders play a role in self-destructive behaviors in this population.
vorige artikel Broader Autism Phenotype and Nonverbal Sensitivity: Evidence for an Association in the General Population
volgende artikel Using Matched Groups to Explore Child Behavior Problems and Maternal Well-Being in Children with Down Syndrome and Autism 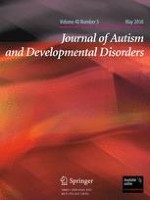 Autism and ADHD Symptoms in Patients with OCD: Are They Associated with Specific OC Symptom Dimensions or OC Symptom Severity?

Broader Autism Phenotype and Nonverbal Sensitivity: Evidence for an Association in the General Population