The EQ-5D is a generic preference-based quality of life measure considered useful for supporting clinical and policy decisions by providing utility values that can easily be converted into quality-adjusted life years to be integrated in cost-utility economic evaluations. Although the three-level classification system of the EuroQol questionnaire (EQ-5D-3L) is still the most popular preference-based instrument used worldwide, several studies reported a ceiling effect on this version, especially in healthy and/or young individuals. In 2009, the EuroQol Group introduced a five-level EQ-5D, which expands the descriptive system from three to five levels within the same five dimensions. For this version to be used in health economic evaluation, societal values need to be assigned to the 3125 health states generated by this instrument.

The aims of this study were to elicit the EQ-5D-5L health state preferences from the general Portuguese population and to derive the Portuguese value set for the EQ-5D-5L.

A representative sample of the Portuguese general population aged above 18 years was stratified by age and gender (n = 1451). Between October 2015 and July 2016, 28 interviewers carried out a series of 1-h-long computer-assisted personal interviews following the EuroQol Valuation Technology protocol. Each interview included the valuation of ten health states using the composite time trade-off (cTTO) and seven pairs of discrete choice experiments (DCEs). A standardized tool for quality control was used to assess the quality of the data as well as direct supervision and cross-examination of 10% of the global sample size. Data from both cTTO and DCE valuation tasks were modelled using a censored heteroskedastic hybrid model.

Interviewers complied with the quality control protocol in providing high-quality valuation data. The hybrid econometric model had consistent and significant parameters. The derived societal values for the Portuguese population ranged from − 0.603 to 1.

This study provided the Portuguese value set for the EQ-5D-5L on the basis of a hybrid econometric model using cTTO and DCE data. These results represent the preferences of the Portuguese population and are recommended to inform health decision-making in Portugal.
vorige artikel A comprehensive catalogue of EQ-5D scores in chronic disease: results of a systematic review
volgende artikel Mapping the Shah-modified Barthel Index to the Health Utility Index Mark III by the Mean Rank Method 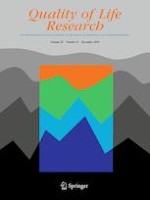 Does fitness attenuate the relationship between changes in sitting time and health-related quality of life over time in community-dwelling older adults? Evidence from the EXERNET multicenter longitudinal study

Development of a mental health recovery module for the WHOQOL

Health-related quality of life in adult population before and after the onset of financial crisis: the case of Athens, Greece