This paper critically examines the historical conceptualization of cognitive behavioral psychotherapy approaches (CBT) as a direct clinical counterpart of the cognitive revolution. The main “second wave” cognitive psychotherapies, either standard cognitive therapy (CT) or constructivist, in spite of their differences, share a common conceptualization of psychopathological factors as superordinate structural cognitive content belonging to the self: self-beliefs, self-schemata, personality organizations and so on. On the other hand, rational emotive behavior therapy (REBT) is an exception given that in REBT self-knowledge is not the core psychopathological tenet, being rather a derivate mechanism. Moreover, in non clinical cognitive science cognition is conceived as a regulatory function that operates retroactively and not in a hierarchically super- ordered fashion centered on the self. A historical review suggests that in both CT and constructivist model the structuralistic model of self-centered cognition may have emerged for both cultural and scientific reasons: self-centered cognitive models may be more readily understandable to clinicians as they allow for a straightforward identification of operationalizable self-beliefs. The emergence of new “third wave” process-centered CBT approaches may represent a comeback to functionalism, where cognition is considered again a regulatory function and not a structure. In addition, REBT’s interest in dysfunctional evaluations not focused on the self presaged this clinical and scientific turning point toward functionalism. 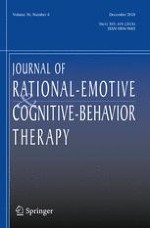 Symptom Attributions Across the Menstrual Cycle in Women with Panic Disorder

Clarifying a Construct: An Integrative Functional Model of Reassurance-Seeking Behaviors

The Manager as Coach: Cross-Cultural Adaptation of an Instrument Assessing Managers’ Coaching Skills