Theory and research suggest that if participants continue mindfulness practice following mindfulness-based interventions, then they are likely to see greater benefit. However, specific theory about what assists and hinders continued mindfulness practice, following mindfulness-based cognitive therapy (MBCT), is lacking. Therefore, we aimed to develop a theory of participants' post-MBCT engagement with mindfulness practice. Since this was a new area of investigation with the aim of theory generation, we chose a qualitative design employing grounded theory. The first author interviewed 13 participants who had attended MBCT courses. The researchers conducted analysis and interviews in such a way that findings from the first seven interviews could influence subsequent data collection. As is the norm for grounded theory, analysis was iterative, moving between the data and higher-level concepts. We gradually developed a theory around an emergent core category. The theory suggests that participants undergo a “journey of mindfulness”, moving in and out of a “virtuous practice cycle” over time. Various obstacles appear associated with leaving the virtuous cycle and integrating mindfulness into one's lifestyle seems an important component of the cycle. This theory contains aspects not included in previous models and could provide an aid to MBCT course facilitators in their efforts to encourage post-MBCT mindfulness practice. 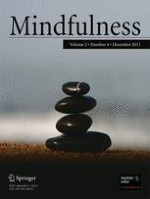 A Preliminary Investigation of the Relationships Between Dispositional Mindfulness and Impulsivity