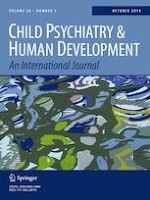 Do Immediate Gains Predict Long-Term Symptom Change? Findings from a Randomized Trial of a Single-Session Intervention for Youth Anxiety and Depression

Friendship Quality in Youth With and Without Disruptive Behavior Disorders: The Role of Empathy, Aggression, and Callousness

An Investigation of the Impact of Childhood Trauma on Quality of Caregiving in High Risk Mothers: Does Maternal Substance Misuse Confer Additional Risk?