The hopelessness theory and Beck’s cognitive theory of depression were compared, controlling for other factors associated with mood change and stress reactivity. Using a high-risk design, 179 individuals were selected based on cognitive vulnerabilities and substance use frequency. Assessments of mood, daily events, and specific attributions were acquired using the Experience Sampling Method. Strong support was found for attributional style and sociotropy as indirect determinants of depressed mood, as well as for the notions of causal mediation and vulnerability specificity. Hopelessness theory explained a slightly larger portion of variance in depressed mood overall. The personality diatheses described by either theory were largely independent of each other and their mechanisms of action were not influenced by depression history or substance use.
vorige artikel Specificity in the Relations among Childhood Adversity, Early Maladaptive Schemas, and Symptom Profiles in Adolescent Depression
volgende artikel Computer-Based Intervention for Anxious and Depressive Symptoms in a Non-Clinical Population 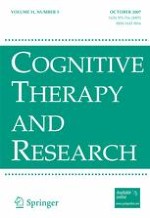