» Toegang tot de volledige tekst krijgen
Belangrijke opmerkingen
An earlier version of this paper was presented to the meeting of the National Communication Association in Dallas, TX in November of 2017.
Publisher’s note Springer Nature remains neutral with regard to jurisdictional claims in published maps and institutional affiliations.

Across industrialized nations, children and teens are a highly prized target for the advertising industry because young people have a tremendous influence on family purchases; however, media scholars have long suggested that young people are a fundamentally vulnerable audience because they lack the necessary developmental competencies to adequately process and protect themselves from advertising communications. Yet, the precise developmental mechanisms have not been clearly articulated nor is there a clear understanding of how these competencies extend across childhood contexts (e.g., developmental phase, cultures). The current study seeks to lend clarity to this matter by looking at the potential influence that children’s executive function and emotion regulation have on the relationship between television exposure (as a proxy of exposure to advertising messages and other consumption-oriented media content) and consumer behavior across a broad range of ages from two wealthy industrialized countries. Mothers of young elementary school children (5–8 years) and early adolescents (9–12 years) in the Netherlands (N = 333, 51.7% female child) and the United States of America (N = 810, 49.6% female child) took part in an online survey to report on their child’s cognitive/affective development, media use, and consumer behavior (i.e., purchase requests, purchase related conflict). The results showed that across ages, executive function via attentional shifting moderated the link between purchase requests and purchase conflict, whereas positively valenced emotion regulation moderated the same relationship but only for older children. Lastly, the findings revealed that while there are differences in reported behavior among children in these two countries, the developmental processes tend to work in the same manner. The discussion focuses on what these findings mean for children’s consumer development as they approach adolescence and how researchers and child advocates should take these developmental factors into account when considering children’s potential vulnerability as consumers.

Titel
A Cross-National Study Examining the Role of Executive Function and Emotion Regulation in the Relationship between Children’s Television Exposure and Consumer Behavior
Auteurs:
Matthew A. Lapierre
Esther Rozendaal 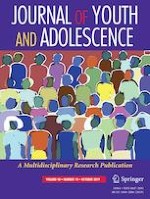 Schools Influence Adolescent E-Cigarette use, but when? Examining the Interdependent Association between School Context and Teen Vaping over time

Factors Associated with Academic Achievement for Sexual and Gender Minority and Heterosexual Cisgender Students: Implications from a Nationally Representative Study

Racial/Ethnic Discrimination and Suicidal Ideation in Emerging Adults: The Role of Traumatic Stress and Depressive Symptoms Varies by Gender not Race/Ethnicity

Defend, Stand By, or Join In?: The Relative Influence of Moral Identity, Moral Judgment, and Social Self-Efficacy on Adolescents’ Bystander Behaviors in Bullying Situations