Involvement in dating violence has been linked with negative health outcomes including depressive symptomology, substance use, and later expressions of aggressing and victimizing behaviors. Less is known about the prevalence and mental health correlates of teen dating violence in countries like Mexico where adult partner violence is high. Additional research on teen dating violence is also needed, as it may be an important precursor to adult partner violence and linked to other mental health problems. The current study used self-report ratings to assess the similarities and differences in risk factors associated with dating violence among middle school students in Mexico and the United States. The US sample (Nus = 15,099; Mus = 12.8; 49.5% female) included non-Hispanic Caucasian (24.9%), Hispanic American (20.3%), and African American (24.2%) adolescents. The Mexican sample (NMexico = 2211; MMexico = 13.67; 51% female) included 93.1% adolescents of Hispanic or Latin descent. Logistic regressions showed that dating violence victimization was reported at similar rates in the cross-national samples, though exposure to risk factors like deviant peers and substance use differed significantly by country. Our analyses indicated that, although the country of residence was not significantly associated with dating violence victimization, the strength of the association between some known risk factors and dating violence victimization varied as a function of nationality, such that there was a significant interaction between country of residence, Mexico or the US, and experiencing internalizing symptoms on experiencing physical dating violence victimization. This study contributes to the growing body of literature on dating violence, both inside and outside the US.
vorige artikel A Moderator Model of Alcohol Use and Dating Aggression among Young Adults
volgende artikel Longitudinal Predictors of Intimate Partner Violence Perpetration and Victimization in Latino Emerging Adults 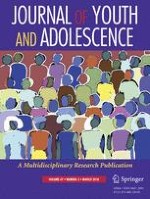 The Co-evolution of Bullying Perpetration, Homophobic Teasing, and a School Friendship Network

Reflections on Six Decades of Research on Adolescent Behavior and Development