A Cross-Cultural Comparison of Autistic Traits in the UK, India and Malaysia | mijn-bsl Skip to main content
ZOEKEN MENU 1 2 3 4

The disorder of autism is widely recognised throughout the world. However, the diagnostic criteria and theories of autism are based on research predominantly conducted in Western cultures. Here we compare the expression of autistic traits in a sample of neurotypical individuals from one Western culture (UK) and two Eastern cultures (India and Malaysia), using the Autism-spectrum Quotient (AQ) in order to identify possible cultural differences in the expression of autistic traits. Behaviours associated with autistic traits were reported to a greater extent in the Eastern cultures than the Western culture. Males scored higher than females and science students scored higher than non-science students in each culture. Indian students scored higher than both other groups on the Imagination sub-scale, Malaysian students scored higher than both other groups on the Attention Switching sub-scale. The underlying factor structures of the AQ for each population were derived and discussed.
vorige artikel Episodic Future Thinking in Children with Autism Spectrum Disorder
volgende artikel A Review of the Role of Female Gender in Autism Spectrum Disorders 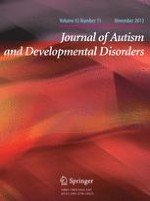 Social Participation Among Young Adults with an Autism Spectrum Disorder