The study’s aim was to estimate the societal costs of children with high-functioning ASD and comorbid anxiety disorder(s) (ASD + AD-group; n = 73), and to compare these costs to children with anxiety disorders (AD-group; n = 34), and typically developing children (controls; n = 87). Mean total costs for the ASD + AD-group amounted €17,380 per year. Societal costs were estimated at almost 142 million euro per year. Costs in the ASD + AD-group were four times higher compared to the AD-group, and 27 times higher compared to controls. ASD-related costs were higher in the ASD + AD-group; anxiety-related costs did not differ between the ASD + AD- and AD-group; costs due to physical or other reasons did not differ across groups. The findings suggest that costs can be decreased if effective treatment options for treating anxiety in ASD are established, however, the remaining costs associated with ASD would still be large. A limitation of the study is that a group of children with ASD without anxiety disorders is lacking.
vorige artikel Cognitive Enhancement Therapy for Adults with Autism Spectrum Disorder: Results of an 18-month Feasibility Study
volgende artikel Multisensory Speech Perception in Children with Autism Spectrum Disorders 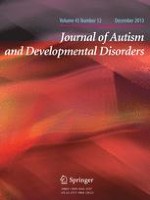 Preliminary Findings of a Telehealth Approach to Parent Training in Autism

Co-segregation of Social Cognition, Executive Function and Local Processing Style in Children with ASD, their Siblings and Normal Controls

Brief Report: Do the Nature of Communication Impairments in Autism Spectrum Disorders Relate to the Broader Autism Phenotype in Parents?

Brief Report: An Evaluation of the AQ-10 as a Brief Screening Instrument for ASD in Adults