We compared two common measures of parenting behavior, the Children's Report of Parental Behavior Inventory (CRPBI) and the Parental Bonding Instrument (PBI), evaluating their psychometric properties and predictive ability. One hundred sixty seven college students completed the CRPBI, PBI, and measures of depression and anxiety with 123 participants returning three to six months later for follow-up evaluations. The parenting measures were found to have similar psychometric properties and to be moderately to highly correlated with each other. In addition, both measures were similar in their ability to predict depression and anxiety symptoms, although neither was significantly predictive of actual diagnoses. Given that the PBI is a shorter measure and, based on previous studies, appears to be more stable over time than the CRPBI, there is evidence to suggest that it might be a more useful measure of parenting behavior than the CRPBI. 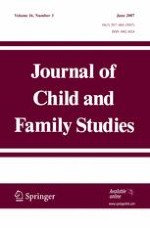 Drop Out from Behavioral Management Training Programs for ADHD: A Prospective Study

Family Interactions in Children With and Without ADHD