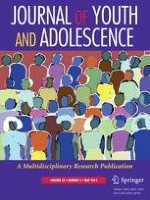 A Longitudinal Study of Somatic Complaints in Urban Adolescents: The Role of Internalizing Psychopathology and Somatic Anxiety

Institutional and Personal Spirituality/Religiosity and Psychosocial Adjustment in Adolescence: Concurrent and Longitudinal Associations